For U.S. and British online retailers, there is huge opportunity in Latin America. A large country like Brazil, for example, is seeing its growth rate for online shopping increase by more than 20% per year. Yet as big as the market may be there are significant difficulties to overcome.

To start, fluctuations in currency rates and high import taxes are two common hurdles, as is the potential of a recession, political instability, and stifling bureaucracies.

The logistics and delivery infrastructure is an issue in many areas as well. Parts of most countries have poor road networks that simply cannot support the speed of delivery companies are used to in the U.S. and Europe. Nonetheless, the numbers of internet users and online shoppers are soaring, with their business available for enterprising retailers of any size to take.

The following graph shows the growth, both actual and projected, in e-commerce sales to consumers in Latin America for the period of 2013-2018. 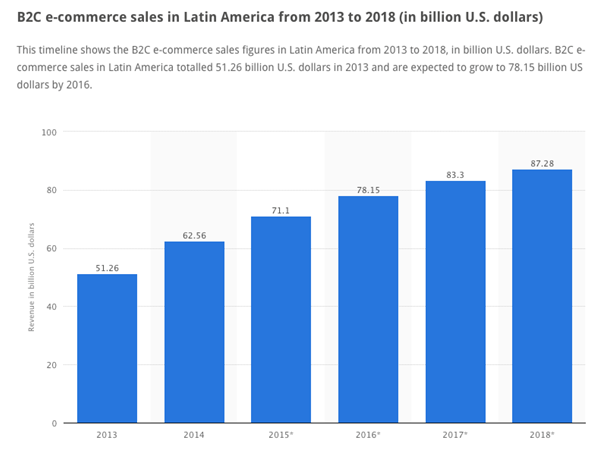 Roads are not the only challenge to ecommerce growth in Latin America. While online stores and payment methods have largely kept pace, delivery service in many locations has not. Customer complaints about the lack of tracking information and slow deliveries are common - as are unresponsive carriers, who are further burdened by outdated equipment and excessive government regulations.

Latin American postal services are working hard to move into the 21st century, but just like their counterparts in North America and Europe, they have had to reinvent themselves because the demands of e-commerce are different than that of traditional mail. The result is the postal service is still often the cheapest shipping option to Latin America, but delivery times and reliability are too inconsistent for online retailers to trust.

Parcel services (like Fed Ex, UPS, and DHL) have invested in improvements that address many of the problems faced by local postal networks, but all three come with much higher rates. Not to mention, seeing the opportunity and demand for better service these companies are raising prices an average of 7% year on year.

The result is it’s less viable for online sellers to use their services with much of their margins being eaten up by delivery costs. On top of that, goods in Latin America are typically sold at lower prices compared to other markets leaving even less profit when a bigger percentage of costs go into shipping.

The good news is there’s a middle ground of delivery speed and low cost. Companies like www.skypostal.com provide just that - better reliability with lower rates - and a level of service attuned to the new digital world. Today, retailers need a shipping partner that integrates via ecommerce software and other technology to keep the entire process working smoothly.

Leveraging a private, established network allows e-retailers to deliver faster to their customers in Latin America while avoiding the high costs that come with the big name parcel carriers.

The better your delivery network, the more satisfied your customers will be.